Westgarthtown
A 19th century German settlement in the north of Melbourne

In December 1849 the German Immigration Committee in Melbourne decided to establish a German settlement that could be a base for German immigrants. The Committee members had seen the success of German settlements in South Australia. So the Melbourne businessman William Westgarth and Captain Stanley Carr (a rich Scot who was visiting Melbourne at the time and who had lived in Germany for 25 years) bought 640 acres (259 hectares) of land 16 km north of Melbourne. The land is now part of the suburbs of Thomastown and Lalor.

Christian and Sophia Ziebell (aged 54 and 51 respectively when they arrived in Australia) built this farmhouse between 1851-56, with 61 cm thick walls. It is the oldest German immigrant building in Victoria. Ziebell's farm was the largest in the settlement, and Christian and Sophia shared the house with their eight adult children, two of whom were married. The building is a typical North German farmhouse. Like the other houses of the Westgarthtown settlement it has a steep roof (in Germany these roofs allowed snow to fall off them). 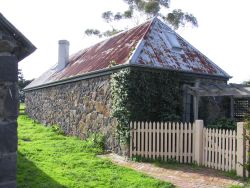 The Ziebell house is L-shaped. The photo above shows the northern wing of the building.

There were lots of large stones in the paddock near the house, both on the surface and below it. The Ziebells saved time in building by not cutting the stones into square shapes. They fitted the stones together according to their shapes. The gaps between stones were filled with rubble and with mortar made of mud and lime. The weather-worn stones that the Ziebells took from the surface of the paddock are brown and red in colour. The dark blue stones were dug out from below the surface of the paddock. 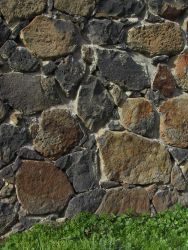 The picture above shows clearly the different coloured stones of the external wall of the Ziebell house.

The house was lived in by generations of the Ziebell family until 1972. Electricity, water (the house has a well), gas and sewerage were never connected to the house. The Ziebell house has been bought and restored by the City of Whittlesea; the other original bluestone homes in the settlement are private homes. 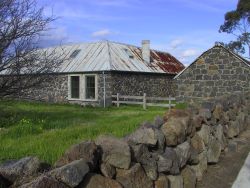 The Ziebell's cart shed (at the right in the photo above) housed chickens and carts in the 20th century. Its walls were built in the same way as the house. The stone fences around the house are simple examples of dry stone walling. 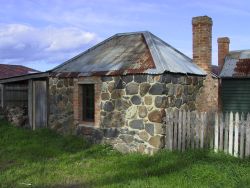 In the smoke house (above) the Ziebells made soap (from a mixture of mutton fat, resin and caustic soda) and smoked bacon, ham and other meats. The building also had a bake oven in which they made the farm's bread.

The church (known as Thomastown Lutheran Church, after the suburb in which it's located) is the second-oldest Lutheran church building in Australia, opened on 17th November 1856. (The church at Lobethal in the Adelaide Hills, South Australia, is older, though no longer used for regular services, due to the modern church built opposite it, to house a larger congregation.) The Westgarthtown church is the oldest continuously used Lutheran church in Australia. English-language services started by 1903. German-language services were re-introduced in the early 1950s, due to the arrival in Australia of many German-speaking immigrants after World War Two. German services stopped during the mid-1970s.

You can see by the bluestone blocks that the church was built by professional stonemasons, unlike the Ziebell farmhouse. The church was very important to the settlers and therefore was built in the middle of the 259-hectare settlement. Both the exterior and the interior of the church are simple and modest in style.

The Westgarthtown heritage site is well worth a visit, and tours can be arranged by contacting the City of Whittlesea in Melbourne, telephone (03) 9217 2170.

Westgarthtown Oral History Project - students of Mill Park Secondary College interviewed people who have a connection with the Westgarthtown settlement.