Australia?? - Info Sources for the Emigrants

Where could people in the German-speaking countries get information from if they were considering emigrating, and weren't sure where to emigrate to?

The earliest source of knowledge for prospective emigrants was private letters written by emigrants who had already emigrated to another country. These letters contained specific information about the experiences of the friend or family member who had left and were a valuable source of first-hand advice. The information in letters reached others as well, though, particularly when the recipient of the letter lived in a village, where all inhabitants were keenly interested in the fate of someone who they knew of. Letters were often passed around, and copied out by hand for distribution to other friends. Some letters were published in local newspapers.

Letters did not always contain useful reliable general information on emigration such as ship-travel and what options are available at the overseas port of destination. Very many books were published which aimed to provide this sort of information, though many of them may only have been bought by the educated parts of society. The peak period of this flood of information was the 1830s, 40s & 50s.
The first book to be published for those interested in emigration to Australia was that compiled by F.L. Bibra in 1823 about Tasmania:
F.L. Bibra. 1823. Schilderung der Insel Van Diemensland Einer Hoescht Merkwuerdigen Colonie in Der Suedsee. Ein Handbuch Fuer Die Dahin Auswandern Geneigt Waeren. Nach Den Von Herrn F.L. Bibra Gesammelten Materialien Bearbeitet Von C.N. Roedling Phil. Dr. J.B. Appel, Hamburg.
(Description of the island Van Diemens Land, a most remarkable colony in the South Seas. A handbook for those who would consider emigrating there.)

Emigration agents were employed by foreign governments to recruit immigrants for their country or region, eg Eduard Delius in Bremen, who worked for South Australia and Victoria; Johann Heussler, who returned to Germany for the Queensland Government; Wilhelm Kirchner, who did the same for the NSW Government and later the Queensland Government, and Friedrich Buck, who worked for Tasmania. They produced brochures, advertised in newspapers, and employed sub-agents who could work for them in other parts of the German states. They usually had special deals to offer which had been worked out by the government that they worked for. Some agents did not have a good reputation. In his 1849 book about emigration to South Australia, the writer J.P.D. Dieseldorf warned of a certain type of emigration agent.

Around the middle of the 1840s emigration really caught the attention of a wide public in the German states and was frequently discussed. Those who had no intention of leaving knew how important it was; "is it good for Germany or not?" In the second half of the 19th century eight specialised emigration newspapers appeared in the German states, though only two of them continued for very long. These newspapers reported (three times a week in the case of the Allgemeine Auswanderungszeitung) on the economic and legal situation in the countries Germans were emigrating to, publishing reports from their own correspondents and letters from people who had emigrated already. They included advertisements from emigration agents.

In the same period a huge number of emigration associations were formed, whose aim was to advise prospective emigrants more thoroughly. Apart from counselling and advice, almost all these associations also had the aim of guiding German emigration into specific countries or regions, where German communities could be established, and where "their national development and independence, though under foreign sovereignty, could be guaranteed". This particular aim was hardly achieved (only to a small extent in South America), but much more important was the counselling work done by these associations. They were able to give warnings about negative aspects of certain countries, and to counter the sometimes unrealistic and wild promises about immigration countries given by emigration agents, who were paid by foreign governments, and particularly the promises made by shipping companies, who were keen to get as many bums on seats as possible.

In 1865 the Allgemeine Auswanderungszeitung printed warnings from the:
Verein für Erdkunde in Dresden, Abtheilung für Auswanderungs-Angelegenheiten (Geographical Association in Dresden, Department for Emigration Matters) about the tropical climate, the political instability and the limited religious freedom in Yucatan; and the
Frankfurter Verein zum Schutze der Auswanderer (Frankfurt Association for the Protection of Emigrants) about emigration to Mexico.

From the end of World War II up until the early 1970s (when economic circumstances changed), Australia was actively seeking migrants, both to increase the population and because of the shortage of workers in Australia. The Department of Immigration produced publicity stories and photographs of individual migrants and their families who had settled successfully in Australia. These "success stories" were published widely overseas to encourage migrants to come to Australia. 20th century versions of publications produced 100 years earlier by people like Wilhelm Kirchner! Until 1983 the Department of Immigration maintained an office in Cologne which accepted immigration applications and provided information. Then the office was moved to the Australian Embassy in Bonn. When the Embassy moved to Berlin in August 1999, the immigration office did also. 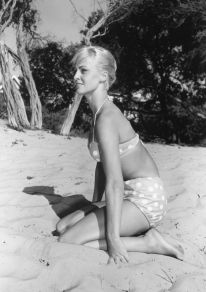 19-year-old German-Australian model Veronika Dielenberg, who had emigrated to Melbourne in 1954 with her family, was chosen from 23 other girls to be the Queen of Melbourne's 1959 Moomba Festival of street processions, dancing, sports, concerts and art exhibitions. Veronika, who emigrated from the town of Rastatt near Baden-Baden in south-west Germany, said that she loves Melbourne's outdoor life. (Department of Immigration and Multicultural Affairs photograph, Cat. # 59/13/19) 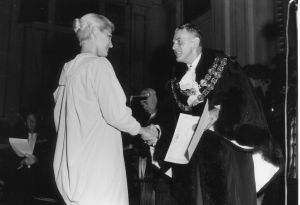 At the citizenship ceremony on 5th March 1959 the Mayor of Malvern congratulates Veronika after her naturalisation. (Department of Immigration and Multicultural Affairs photograph, Cat. # 59/13/21)

In the early 1960s a "shopping dictionary for German-speaking immigrants" (Taschen-Wörterbuch Für Deutsch Sprechende Immigranten) was published in most of the Australian state capitals by Percival Publishing Co. It contained a variety of introductory information as well as word lists.
You can read more and see pictures from the book.

The Department of Immigration and Multicultural Affairs (DIMA) staff at the Berlin embassy are responsible for immigration applications from people living in Germany and Switzerland. Austrian citizens living in Austria apply to the Australian Embassy in Vienna. Due to financial cutbacks, DIMA has in each of those countries a mailing house (private organisations) which distributes application forms and information leaflets on DIMA's behalf.

For more than a hundred years prospective emigrants have also obtained advice from the Raphaels-Werk, a Catholic welfare agency for emigrants in Germany, based in Hamburg. It provides advice and assistance to people leaving Germany either temporarily or permanently. The Raphaels-Werk has counselling offices in 25 German cities and is officially recognised by the German Government. In 1871 the Raphaels-Werk was established under the name St. Raphaels-Verein zum Schutz katholischer deutscher Auswanderer. St. Raphael is the patron saint of travellers. In 1941 the organisation was closed down and banned by the Gestapo. It was re-established in 1947. In 1977 the name was changed to Raphaels-Werk. In the 1990s it assisted many refugees passing through Germany on their way to new lives in countries like the USA, Australia and Canada.

In comparison with earlier times German emigrants nowadays have access to masses of information. There is even a website that specialises in emigration news and tips. In 2001 the site Auswandern-aktuell said this of Australia:

Auswandern-aktuell.de has a web forum in which would-be emigrants can exchange information and discuss the pros and cons of emigration itself.

German-speakers wanting to emigrate to Australia can access via the Internet lots of information helpful not only for their planning but also after their arrival in Australia. These websites provide information about the Australian lifestyle from a German perspective, about job opportunities and procedures, about authorities and service providers in Australia (e.g. the health system) etc.

In Australia's large cities there are several so-called "Stammtische", where groups of Australians (who wish to speak/practise their German) and German-speaking immigrants meet regularly to chat in German. Members of these "Stammtisch" groups often use the Internet to organise their meetings/events.