(Before unification in 1871, "Germany" consisted of many independent states and kingdoms. In these pages the word "German" refers to all areas from which the immigrants came.)

One of the most popular recreational activities of the early German immigrants was singing. They sang not only in church but also formed singing groups, known as Liedertafel. Carl Linger founded the first Liedertafel in Adelaide in 1858, which still exists as part of the South Australian German Association. The " Adelaider Liedertafel 1858" is the oldest continuously operating male choir in Australia. In 1862 a Liedertafel was established in Tanunda (Barossa), which is also still in existence. Music was an important social activity and every German settlement of significant size in the 19th century had a brass band. Usually the girls learned the piano and the boys learned brass instruments.

Singing is still a popular activity in the German-speaking clubs of Australia. The Club Tivoli in Melbourne still has its "Liedertafel Arion", founded in 1860. At the SAADV in Adelaide people can also join the German Folk Dance Group (Deutscher Volkstanzkreis) and the German Folksong Choir (Deutscher Volksliederchor). There are similar choirs for women and men at Melbourne's Club Tivoli as well as in clubs in other Australian states.

The historic Kegelbahn, or skittles alley, was built in 1858 in Herr Paul Fischer's tea gardens at the southern end of Tanunda. It is the only Kegelbahn still in existence in Australia. In earlier times there were Kegelbahns in various Australian towns.

10-pin-bowling is a much more recent development in Australia than Kegeln; the first 10-pin-bowling alley was built in Sydney in 1937. However, that alley did not take off and it wasn't until 1960 that 10-pin-bowling became popular, when an 8-lane manually operated bowling centre was built at Glenelg in South Australia.

The Tanunda Kegelbahn quickly became popular in the 19th century. The bowling competitions were social events, held mostly on Sunday afternoons from 1:30 pm until 5:30 pm. Coffee and German cakes were served. In the 19th century there were two bowling lanes; since 1898 there has been only one lane. 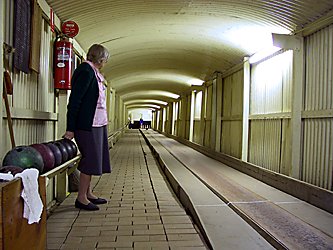 In 1931 the Kegelbahn was dismantled and reassembled at the Tanunda Showgrounds. The scoring system in Kegeln is quite complex in comparison with 10-pin-bowling. To leave only the front pin (Kegel)of the nine pins standing is a great achievement; it gets you 60 points. The Tanunda Kegelklub is still active today, and in May 2001 the historic alley was renovated thanks to a heritage grant from the government.