During the Second World War many German and Austrian civilians and soldiers were sent to internment camps and Prisoner-Of-War camps in Australia. These camps had to be located far from Australian cities and the coast and the people in the camps were not to have contact with Australians. In the Tatura area in the north-east of Victoria camps were set up and the internees and prisoners of war received the same food and accommodation as the Australian Army soldiers guarding them.

The Germans and Austrian refugees whom the British government sent to Australia on the Dunera were also interned at Tatura. Britain had feared a German invasion and was not sure that these Germans and Austrians were not spies, despite the fact that they had fled from Nazi persecution. On the Dunera they were badly treated by the British guards. 2000 people were transported on the ship, although it was officially too small for this number.

Read poems (in German) by Dunera-passengers, about the journey and their internment:

They sang on the "Dunera" (anonymous)

The artist and teacher Ludwig Hirschfeld-Mack was an internee in Tatura. He produced the two woodcuts you see below, depicting the camp.

The largest group of internees in Family Camp No.3 were the Templer-Germans from Palestine. They were transported to Australia on the Queen Elizabeth in 1941. They didn't know where the ship was headed for. In Family Camp No.3 they established a school, in which the children received a good education despite the difficulties. Difficulties included lack of teaching resources and textbooks, too little classroom space and the need to teach children of different age groups together. However, in this school the older students were actually able to complete their Abitur (school leaving certificate). They were able to do the following subjects: German, English, French, Latin, Geography, History, Chemistry, Physics, Biology, Art and Physical Education. The students' Abitur certificate was later recognised by German universities and the University of Melbourne.
Read the report by Wilhelm Eppinger (School Principal) on the difficulties of the camp school (1943, in German)

Photos could only be taken with the permission of the Australian camp commander and were taken by a military photographer. This is the reason for the small sign showing a catalogue number, which you can see in the photos below. 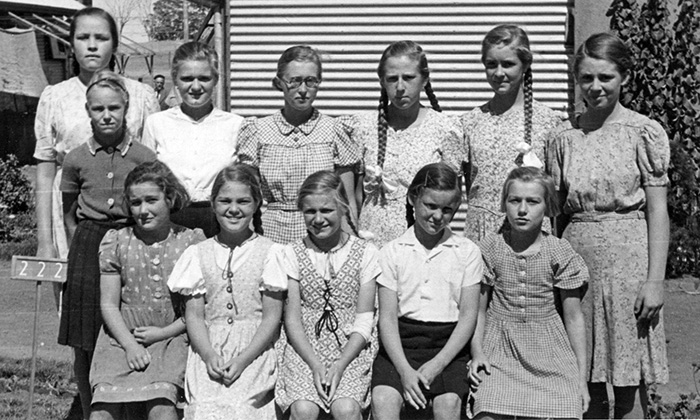 School students in Family Camp No.3 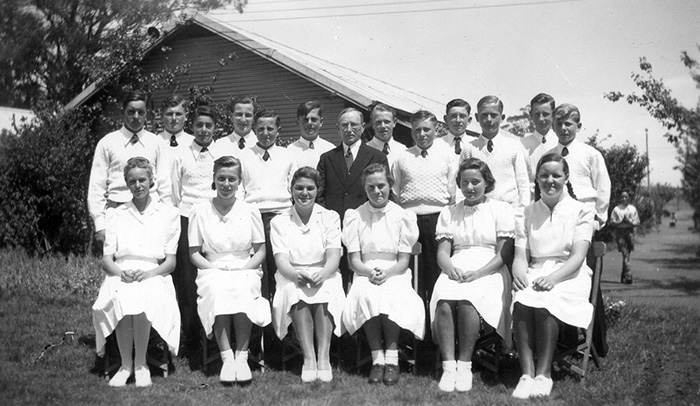 "Werner Blaich's Story" (Werner was born in Palestine and was interned with his family in Tatura, Victoria. He stayed in Australia. Werner describes among other things the ship's journey to Australia and life in the internment camp. PDF-file, 51Kb. No Adobe Acrobat?)