German Settlement in Queensland in the 19th Century - Overview

Queensland became a separate colony from New South Wales in 1859. In 1861 there were only about 2,000 Germans in Queensland, and they were mainly in the cities, working as labourers and tradesmen. The gold rushes of the early 1850s had made Australia a popular destination for many Europeans, and in 1852 regular migrant shipping services started up from the port of Hamburg. However, up until the early 1860s few German immigrants went to Queensland; Germans leaving Europe heard little about Australia's north, communications between the southern parts of Australia and the north were poor, people didn't have much experience with sub-tropical agriculture, and gold fever drew people to Victoria and New South Wales.

The first Queensland Government set up a committee under Dr John Dunmore Lang (head of the Presbyterian Church in Australia). This committee sent Johann Christian Heußler, a successful German businessman in Brisbane, to Germany to recruit immigrants for Queensland. He was able to offer immigrants attractive deals, including free ship's passage, good wages, and the right to select land to the value of £12 once their compulsory period of service (usually 2 years) to a local employer was over. The employer had paid for their ship's passage. Heußler did a good job and Germans arrived in Queensland in large numbers over the next decade and more, mainly in family groups. This period was, though, a time of particularly high emigration from Germany (overpopulation in some states, fear of being caught up in Prussia's wars against Denmark, Austria and France), and Queensland's immigration program benefited from this.

As labourers they were popular with employers: their limited knowledge of English made it difficult for anyone wanting to stir up unrest between them and their employers, they looked "the same" as their neighbours of British origin, and they were Christian, which suited Dr Lang.

The first homes they built were made of mud and thatch, but once their first crops had been sold, they built more solid slab wall and shingle-roofed houses. Germans moved into the first areas that were opened up by the Government for agricultural settlement, and some of these areas were hilly and clearing the scrub for cultivation was very hard work, all done with hand-tools in those days (whatever they could carry in with them). Crops had to be protected (usually by the children) from wallabies, rats and birds. Apparently the German settlers sometimes referred to Queensland as Quälsland (land of torment)! This type of terrain made the land more suitable for small mixed farms, and most of Queensland's Germans came from a rural farming background, whereas most British migrants were from cities.

Sir Thomas McIlwraith (3-times Premier of Queensland between 1879-1893), said in the Queensland Parliament:

"Having disembarked from the ships and spent one or two days in the Immigration Depot, the German immigrants disappear. One hears or sees nothing of them for 18 months or a couple of years, when some fine day they return from the bush in their own attractive turn out, wife and children seated high, and all well-dressed and happy-looking." 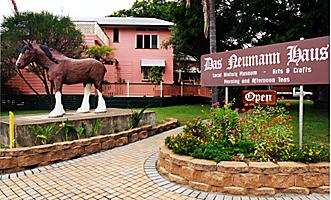 The Neumann Haus in Laidley is today a house museum. It was built in 1893 by Herrmann Neumann for his family. Neumann had come to Australia from Uckermark in Eastern Prussia in 1884 with his parents. He established a successful furniture-making business. Neumann's wife Annie was the well-educated daughter of an English woman and a German. Their home in Laidley was considered a cultural centre of the community. (Photo: Peter Blöcker)

Many German immigrants also found work on the construction of the Ipswich-Toowoomba rail line. Although Germans initially settled in the south-east corner of the colony, soon German immigrants headed north, with many involved in sugar-cane growing in the Bundaberg area, Rockhampton, the Mackay area, and some gold-seekers going to Charters Towers. In 1890 all 6 of the sugar mills in the Logan district were owned by or managed by Germans. Where numbers of Germans were high enough, German schools, Lutheran churches, German associations (with the usual gymnastics and choral societies) were established. By 1900 the Darling Downs had around 1500 German families, three Lutheran churches and a German association. In the farming communities, until around 1900, the social and moral focus was their Lutheran church rather than German associations. German associations played a bigger role in the towns. Prior to World War I there were many German placenames in the areas of German settlement (during the war the state government changed most of the German names - see a List of German placenames in Australia). As late as 1891, in some Queensland districts the proportion of Germans marrying another German was as high as 80%. 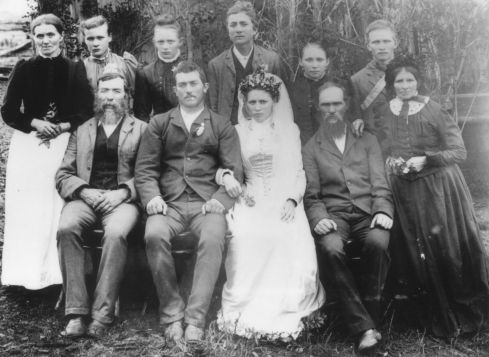 By 1900 there were 600 German-speaking families in Brisbane, and Germans were active in all walks of life, from members of parliament to varied types of businesses.

Map: Distribution of the Germans in Queensland around 1900 (from: Borrie, Wilfried. 1954. Italians and Germans in Australia / A Study of Assimiliation. F.W. Cheshire, Melbourne).

Johann Heußler, the immigration agent (who later became a member of the Legislative Council of Queensland), built his large home Fernberg (meaning "distant mountain") in 1864/1865 on 9 hectares of land bought from the Government in 1862. The Heußler family occupied Fernberg until 1872 when financial difficulties forced them to sell it. The Queensland government wanted a new Government House and bought Fernberg for £10,000 on 30 June 1911.