Historical background of the Templer colonies

Departure for Australia - Why did the German Templers have to leave Palestine?

Christian Hoffmann and G. D. Hardegg founded the Temple Society at Kirschenhardthof near Ludwigsburg in 1861. This religious society has its roots in the pietistic movement within the Lutheran Church in the State of Württemberg in south-western Germany.

Why the name "Temple Society"? - The founders of this religious community called it "Deutscher Tempel" (German Temple) because they wanted to "bring God's people together, each person as a living spiritual building block in the temple of God in the Holy Land (Palestine)".

In 1868 Hoffmann and Hardegg founded the first German Templer community in Haifa, on the foothills of Mount Carmel in the Holy Land - Palestine. The demanding pioneering work under the most arduous conditions in a harsh land with next to no outside assistance took its toll. Epidemics and diseases claimed many victims, at some locations wiping out whole families. Gradually, however, the tenacious hard work and heavy sacrifices of the pioneering settlers bore fruit. Their contributions towards raising the standards of agriculture, crafts, trades, business and building in an undeveloped province under Turkish rule were significant. Their achievements in road building and in establishing regular coach transport services were exemplary.

By 1910 there were well established German settlements and thriving communities in Jerusalem, Haifa, Sarona, Wilhelma, Betlehem and Waldheim near Nazareth. 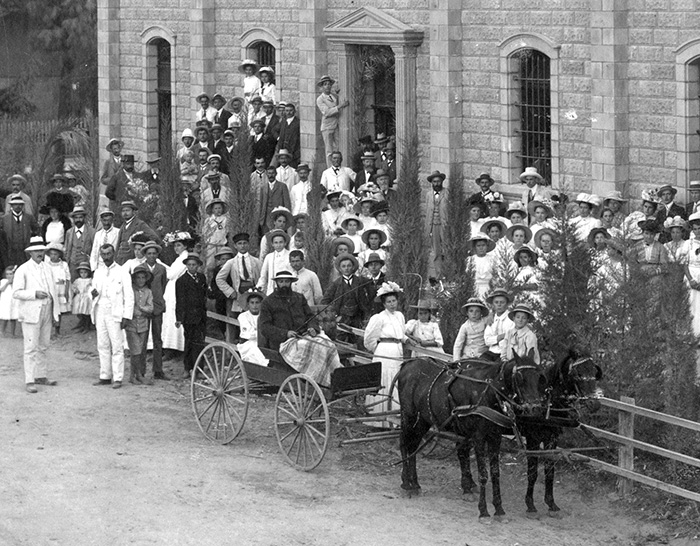 Inauguration of the Sarona schoolhouse, c.1910

The German settlers established the first successful agricultural enterprises in Palestine and thus indirectly formed part of the foundation for the new state of Israel in 1948.

The Templer motto:
"Set your mind on God's Kingdom and His justice before everything else, and all the rest will come to you as well." - Matthew 6:33
"Love the Lord your God with all your heart, with all your soul, with all your mind. That is the greatest commandment. It comes first. The second is like it: Love your neighbour as yourself." - Matthew 22:37-39

The pietistic movement originated during the late 1600s in the Lutheran churches in Germany and stressed personal religious devotion over the formality of organised churches.