Three kilometres south-east of Hahndorf lies the village of Paechtown, where several beautiful half-timbered German houses were built by settlers who moved from Hahndorf.

The "Joint Stock Cattle Company" was formed on 9th April 1838 and was given the use of land south of Mount Barker. The first bulls and cows for the land came overland from Sydney. In 1843 the Cattle Company got into financial difficulties. For a long while there were no buyers for the land which the Cattle Company had used. However, Johann Friedrich Wilhelm Paech, a successful landowner at Grünthal (now Verdun) who had arrived in South Australia on the Zebra and settled at Hahndorf first, was waiting for the right time and price. He was of the Paech family from Rentschen in the Prussian province of Brandenburg. On 10th February 1846 he and Pastor Augustus Kavel bought the Cattle Company's land, 476 hectares, for £1,300. J.F.W. Paech's land became known as Friedrichstadt. 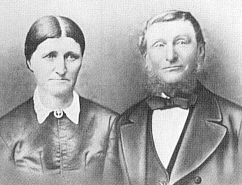 The house pictured below was built sometime in the mid 1850s by Johann Georg Paech (a different Paech family, from the village of Kay in Brandenburg), who had arrived at the age of 12 with his family on the Zebra, and his wife Johanne (Hannah) Karoline Hartmann, who had arrived at the age of 10 with her family on the Prince George. They had been married on 4th January 1850 by Pastor Kavel in the Hahndorf Lutheran church. Johann Georg's brother Johann Christian had bought from J.F.W. Paech parts of the Friedrichstadt land on behalf of his father and brothers. Georg and Hannah had five children - Wilhelm, Caroline, Hermann, August and Bertha. Hannah's mother stayed in Hahndorf almost all her life, but moved to Hannah's Paechtown home for the last 10 years of her life, before she died in August 1897 at the age of 96. Hannah herself died in November 1898 at home in Paechtown. Georg died in 1908. (The photo shows Johanne and Georg.)
(Source: Butler, Reg. 1982. George Hartmann of the Prince George. Investigator Press, Hawthorndene (S.A.)

This house is a beautiful example of German half-timbered (Fachwerk) construction. As with other half-timbered houses in South Australia, the house's heavy frame is made of redgum (rather than oak as in Prussia). The timber frame is a great example of carpentry. There are no nails. Timber dowels hold the pieces together. In this particular house the spaces between the timbers are filled with bricks. Sometimes in Fachwerk-buildings the spaces were filled with wattle-and-daub, or with clay and stones. Examples of the distinctive Fachwerk building style survive in some early settlements of the Barossa Valley and the Adelaide Hills. However, German immigrants and descendants of the early groups mostly built their houses according to the colonial Australian customs of that time. 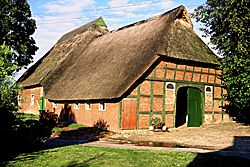 For the purpose of comparison:
a Fachwerk barn in the north of
Niedersachsen, Germany 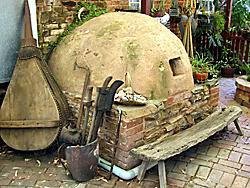