The following are official placenames in Australia today:

- a suburb in the west of Melbourne; a suburb of Hamburg in Germany

Arkona is a locality on the Dimboola-Rainbow Road in the Wimmera in the west of Victoria. It was settled in 1890 predominantly by Germans. Local history has it that the name Arkona was selected because Cape Arkona in Germany was a favourite place of one of the Lutheran ministers of that part of the Wimmera. Cape Arkona is the northern tip of the German island of Rügen in the Baltic Sea. Cape Arkona is affectionately known in Germany as "Germany's North Cape". (Professor Lodewyckx of the University of Melbourne, who wrote a book in 1932 about the Germans in Australia, stated that the name Grünwald also existed for Arkona in the early days.)
This origin of the placename Arkona is also given in a 1944 book about placenames in Victoria and Tasmania, although it is not expressed very clearly.

Brunswick is the English name of Braunschweig, a city in northern Germany. The pioneer Thomas Wilkinson named his property Brunswick after Princess Caroline of Braunschweig; she was the wife of the British king George IV.

Charles Hotson Ebden, pastoralist, overlander, businessman and politician, born at the Cape of Good Hope [South Africa] to wealthy parents, was educated in England and in Karlsruhe, Germany. He came to New South Wales and his stock were the first to cross the Murray River. In 1837 he settled on the Campaspe River west of Mount Macedon and named the area Carlsruhe after the German city. Later he became a successful politician in Melbourne and helped William Westgarth bring German immigrants to Victoria.

The suburb used to be named 'Pentridge', but the residents wanted to change the name, in order that the name of their town would not be associated with the large prison there. In March 1870 the suburb was given the new name Coburg to honour the Duke of Edinburgh; he was a member of the German royal house of Saxony-Coburg-Gotha. His father Albert, husband of Queen Victoria, was from Germany. Coburg is also the name of a peninsula in the Northern Territory northeast of Darwin. The peninsula was named after Prince Leopold of Saxe-Coburg-Gotha, who was the uncle of the British Queen Victoria. Prince Leopold later became King of Belgium.

10 km southeast of Bright; the name may possibly be an English version of Fredeburg, the name of a village in Schleswig-Holstein in the north of Germany...Heinrich Traulsen came from that region. 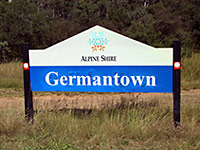 6.5 km southeast of Bright; German Creek and Germantown were named after two Germans who found gold there and who were among the first settlers. Heinrich Traulsen, born in Schleswig-Holstein in 1836, and Ferdinand Blumner arrived in 1856 at the place that became Bright. They both became respected citizens of the area.

A locality on the Hamilton Highway 41 km from Geelong; named after George Hesse. In 1837 Hesse and Joseph Gellibrand, two Van Diemen's Land lawyers explored the Upper Barwon district. It is assumed that they were killed by Aborigines. Also Mt Hesse (about 10 km north-west of Winchelsea) and Point Hesse (west of Port Campbell). Hesse is the English name of the German state of Hessen. Hesse is also the surname of the Nobel-Prize-winning German author Hermann Hessse.

Northwest of Geelong; named after the Irish-German brothers Von Steiglitz - they owned large properties in Tasmania and moved from there to Victoria in June of 1836.

The town has this name since the early 1880s. It is believed that it was named after a German family who lived there.

During the First World War the Queensland Government replaced the name Marburg with the name Townshend, named after a British general. At the end of the war the people of Marburg asked for the old name to be returned, which the government did.

Locality near Charters Towers, named after the German immigrant Philipp Friedrich Sellheim. He came to Australia in 1855, and was mine inspector on the Charters Towers goldfields from 1880-1888. In 1892 he became Under Secretary for Mines in the Queensland Government. 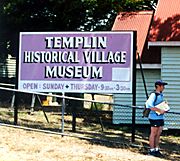 Templin was named by W F Hoenhaus after his birthplace in the West-Uckermark area, about 80 km northeast of Berlin. In the late 1870s a number of families emigrated from this area and settled on the Teviot Range in southeastern Queensland.

Derived from "Zillman's Waterhole" - Johann Leopold Zillmann, one of the early missionaries whom John Dunmore Lang brought to Queensland

Outer northwestern suburb of Sydney; named after German immigrant Wilhelm Emert, who was postmaster and storekeeper at Mt Druitt in 1861

Outer southern suburb of Sydney; named after the Swiss part of the valley of the River Inn

Named after a spa town 50 km southwest of Hannover, Germany

A suburb in the south of Sydney. The name is indeed French, but the suburb was named after the magnificent Sans Souci palace, which the Prussian King Friedrich the Great built in Potsdam in 1745. Sans Souci means "without a care".

A public park in the Perth suburb of Subiaco. In 1883 the park was given the name Mueller Park to honour the famous German-Australian botanist Baron Ferdinand von Mueller. Due to the wartime anti-German hysteria the Subiaco council changed the name to Kitchener Park in 1916. Lord Horatio Kitchener was a British war hero. The names of Ferdinand Street and Mueller Road, which had also been named after the German-Australian botanist, were also changed. In July 1980 Subiaco council decided to restore the original name to Mueller Park.

A locality northeast of Augusta, named after the Schroeder family, who farmed there from 1929-1989. After clearing the land they ran some cattle, then grew tobacco and later planted an orange orchard.

Names of German scientists in the landscape of Central Australia

During the 19th century quite a large number of scientists from the German-speaking countries were active in Australia. Some mountains in Central Australia are named after German scientists, for example: Mt Liebig, Mt Zeil, Mt Sonder, Mt Winnecke, Mt Leichhardt, Mt Heuglin, Von Treuer Tableland, Mt Feldtmann, Sachse Bluff, Haast's Bluff, Mt Von Mueller, Mt Mueller, Ferdinand Hills. The botanist and researcher Ferdinand von Mueller asked the explorer Ernest Giles to name a group of mountains near Uluru after the Queen of Württemberg. For a long time they had the name The Olgas (Queen Olga). Today they have the Aboriginal name Katatjuta.

In earlier times Australia had many more German placenames, but local residents and governments have changed many names. Most of the German names in the following list were changed during the First World War. However, a few of the placenames listed below were not changed, though they are today very small rural localities without postcodes. Most German immigrants in the 19th century settled in rural areas.