The Naming of Children

From The Barossa, a Vision Realised. The Nineteenth Century Story.

The families which originated from East Germany followed the customs of naming children as practised in that region. Usually they were known by their second Christian name if they had two or by the third when given three. It was very common practice for the first name to be Johann for males or its feminine form Johanne for females. A group of names very popular last century reflect the strong religious convictions of so many of the Barossa's early settlers. These names include Gottlieb (God's love), Gottlob (praise God), Gottfried (God's peace), Traugott (trust God), Dienegott (serve God) and Leberecht (live right). Certain combinations of names were also very popular, the most common of these being Friedrich Wilhelm. Members of the House of Hohenzollern the Rulers of Prussia were known by this combination which seems to have led almost every family in their Realm to name one of their sons Friedrich Wilhelm. Despite the fact that it was Friedrich Wilhelm III of Prussia's policy of Church unity that caused the Barossa's first settlers to seek freedom of worship in South Australia, these families continued using these names for several generations. Carl was also frequently the first of another group of combinations including Carl Friedrich, Carl Heinrich, Carl Gustav, Carl August and so on. Often these combinations were preceded by Johann therefore there were countless Johann Friedrich Wilhelms, Johann Carl Augusts, etc.

Another two popular combinations were Gustav Adolph, commemorating King Gustav Adolph of Sweden, who came to the rescue of the Lutherans during the thirty years' war and Paul Gerhard in honour of the Silesian hymnwriter Paul Gerhardt.

Many of the commonly used girls' names were feminine forms of masculine names such as Louise, Auguste, Pauline, Ernstine, Friedericke, Wilhelmine and even rarely Gottliebe. Therefore it was possible for a husband or wife to be named Friedrich Wilhelm and Friedericke Wilhelmine respectively or perhaps Johann August and Johanne Auguste. For girls Anna was frequently used in combinations like Anna Maria, Anna Rosina, Anna Elisabeth and Anna Dorothea.

Not all of the Barossa's settlers were from the East German provinces of Brandenburg, Silesia and Posen. Others were North Germans from Mecklenburg, Hannover, Holstein and Oldenburg. These people were frequently known by their first forename (sometimes the name Johann). They also used some names which were seldom used by the East Germans, Joachim, Franz and Ludwig for boys and Sophie, Caroline, Henrica, Catherina and Margarethe for girls.

Another distinct group the Wends or Sorbs from Lusatia in Saxony often had only one forename, amongst the popular ones we find Andreas, Martin, Christian, Jakob and Matthes for boys while girls often were named Magdalena, Agneta or Christiane. Because of the duplication of forenames many people were given nicknames. In later times many English derivations were used thus Johannes was known as Jack, Friedrich as Fred and Wilhelm as Bill.

Dienegott Jaeschke went from SA to the Victorian goldfields and survived a bushranger attack on the way back home. 'Dienegott' means "serve God". 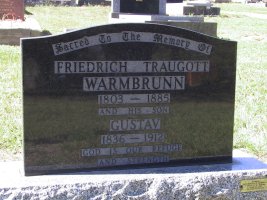 Another immigrant to South Australia in the first groups was Friedrich Traugott Warmbrunn. 'Traugott' means "trust in God". (He arrived with his family on the Bengalee on 18th November 1838 at the age of 35. They lived first at Klemzig, then moved to the Barossa Valley. In 1853 they travelled overland to the gold town of Castlemaine in Victoria, where they lived until 1856, when they moved to Harkaway, east of Melbourne, which had been established earlier by German settlers. Harkaways Germans started a Lutheran school in July of 1856, of which Warmbrunn was the first teacher. He had to give up the position in 1857 as the Denominational Schools Board, which paid grants to church schools, would not register him, because of his poor English. He was an active churchman, and attended the first two Synods of the Lutheran Church in Victoria, 1856 & 1857. He is buried in Harkaway cemetery.)

On 17th April 1844 at Bethany, South Australia, Benjamin Dienegott Leberecht Grosser was born. He was the first child born in Australia to the Grosser family, who arrived on the Skjold in 1841. The name Leberecht may be interpreted as meaning "live right".