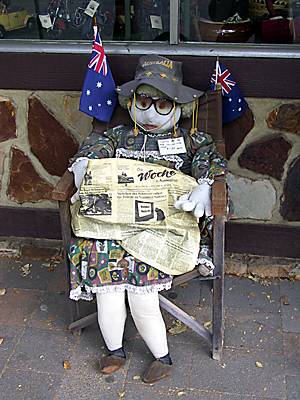 German-language newspapers, radio and television broadcasts offer information and entertainment to Germans, Austrians, Swiss and others in Australia who appreciate the German language.

German-language newspapers in Australia have had an eventful history. Over the years many papers and magazines were established in South Australia, Victoria and Queensland. Some survived only a few years, and numerous mergers took place.

In 1954 Dr Mark Siegelberg (an Austrian immigrant) established the newspaper Neue Welt in Melbourne. Today it's called Neue Heimat und Welt, appears monthly and is available in other states as well.

Regular German-language radio broadcasts in Australia began in June 1975 with the establishment of the multicultural radio stations 2EA (Sydney) and 3EA (Melbourne). These stations were under the control of the Attorney General's Department.
The Special Broadcasting Service assumed responsibility for both stations on January 1st 1978.
German broadcasts began:

on 3EA in 1975 with three broadcasters - coordinator Mr W. Schauble

on 2EA in 1976 with twelve broadcasters - coordinator Mr Claus Hannekum

In 2002 the magazine "Deutschland" (produced by the Press and Information Office of the German Government, issue #3/2002) wrote:

"Alongside the USA and Canada, Australia is one of the countries with the most radio broadcasts in German. Around 50 different programs are produced there. The most extensive program comes from the government multicultural broadcaster "Special Broadcasting Service (SBS)".

In 1980 the Federal Government established the Special Broadcasting Service (SBS), with radio and TV broadcasts in many community languages. SBS Television often shows documentary films in the German language from Europe, as well as movies from Germany, Austria and Switzerland.
The SBS website carries information about the broadcast times of its German-language programs.

In Australia one can also listen to the broadcasts of Deutsche Welle, Germany's international broadcaster.