Where has his name become part of the Australian landscape?

Ludwig Leichhardt is commemorated in the names of: 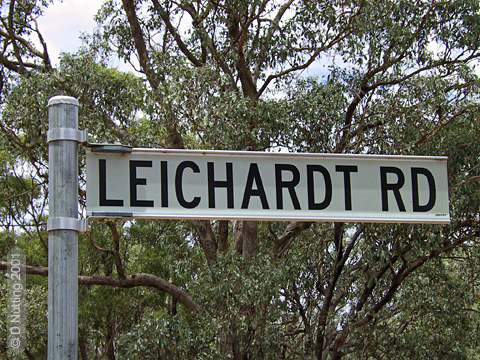 Leichardt Road, in the hamlet of Leichardt, northwest of Bendigo, Victoria

♦ a hamlet 20 km north-west of Bendigo, Victoria (spelled with just one 'h');

♦ Leichhardt Tank, a stock watering tank in the north-west of the Northern Territory, 180 km north-east of Kununurra.

♦ an inner suburb of Sydney; 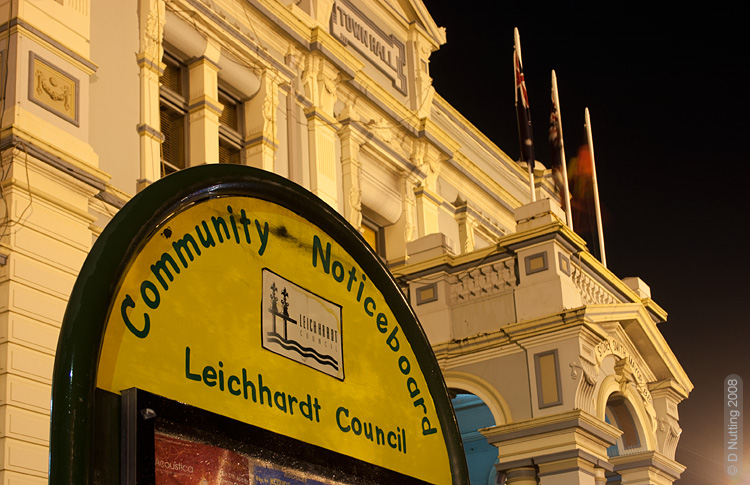 Leichhardt Town Hall, in the suburb of Leichhardt, Sydney

Not surprisingly, Leichhardt's name appears most of all in Queensland, where many useful discoveries occurred on his successful first expedition: 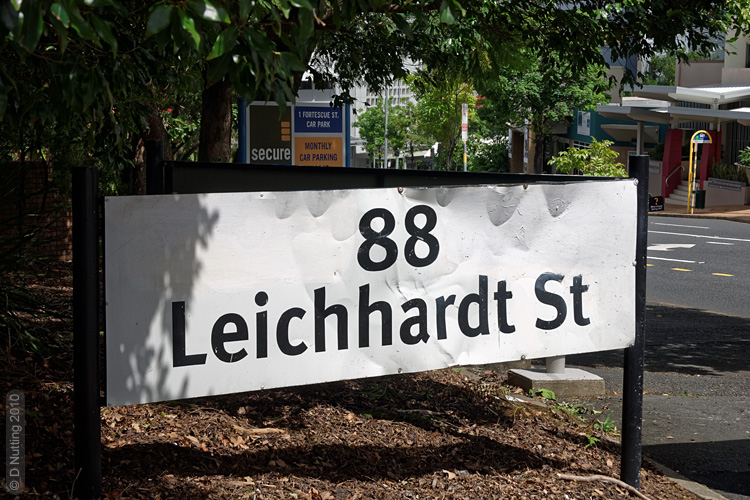 ♦ the Leichhardt River in north-west Queensland;

♦ Leichhardt Colliery, a coal mine at Blackwater, 240 km west of Gladstone. Leichhardt noticed coal deposits here during his expedition;

♦ two separate Leichhardt Creeks on the eastern side of the Gulf of Carpentaria;

♦ the Leichhardt Highway (which runs along part of the route of his Port Essington expedition, and is 678km long, from the town of Goondiwindi in the Western Downs to Yeppoon on the Capricorn Coast); 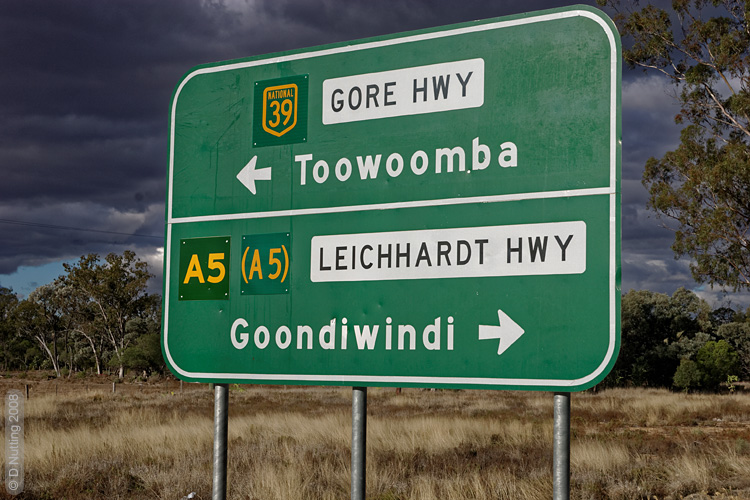 ♦ the Leichhardt Range of mountains, approx 140 km west of Mackay; 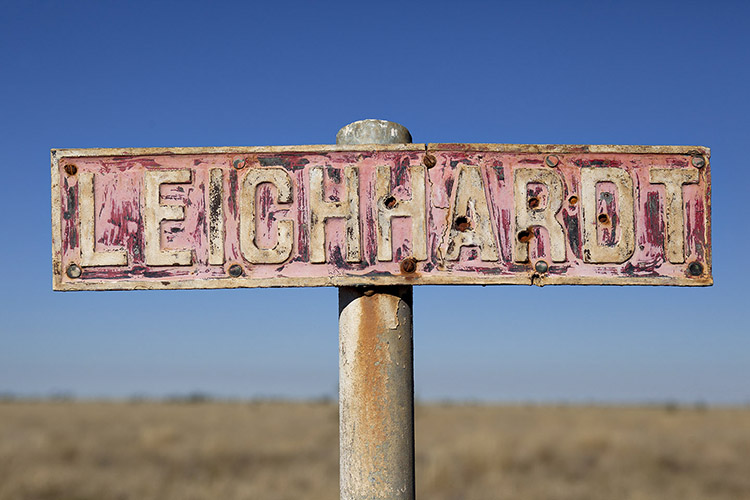 A weather-beaten sign at "Leichhardt Farms" in western Queensland's Channel Country.
This photo is copyrighted by Andrew Chapman Photography and is published here by kind permission of Andrew Chapman.

♦ an outer suburb of Brisbane (and of course businesses in that suburb);

♦ an Australian Federal Parliamentary electorate covering the far north of Queensland (the parliamentarian Warren Entsch is the MP for this electorate. He is a proud descendant of German immigrants from Saxony who arrived at Adelaide in the late 1840s. They later moved to Townsville, Queensland, and later further north still. Warren Entsch was the member for Leichhardt from 1998-2007 and has again represented Leichhardt since 2010. From 1998-2001 he was the Parliamentary Secretary for Industry, Science and Resources, and from 2001-2006 he was Parliamentary Secretary for Industry, Tourism and Resources. From 2010-2013 he was Chief Opposition Whip in the House of Representatives.) - see 'Profile of the electoral division of Leichhardt (Qld)' in the website of the Australian Electoral Commission; 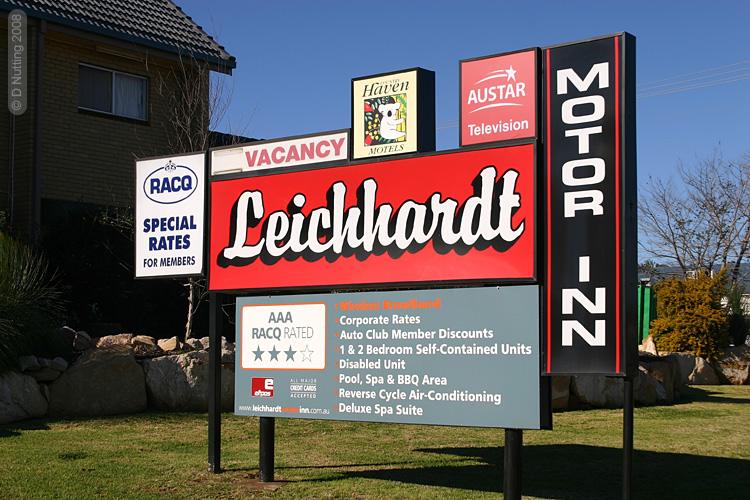 ♦ a rowing club in Rockhampton;

♦ a catering company in Mt Isa;

♦ a gymnastics club in Mt Isa;

♦ a butchery in Menzies;

♦ a retirement home in Taroom;

♦ a pest control and carpet cleaning business in Wandoan;

♦ a construction company in Warana;

♦ a construction company based in Mareeba offers a variety of home designs; the range includes a design called the Leichhardt (210m2, a four bedroom, two-bathroom, rendered masonry block home);

♦ a soccer club in White Rock.

♦ The newest passenger jet ('VH-XZO', of the type Boeing 737-800) of Qantas Airways was ceremonially given the name 'Leichhardt' in Brisbane on 28th October 2014. In attendance at the naming ceremony were a descendant of Leichhardt (his great-grand-nephew, also named Ludwig Leichhardt) and the President of the German Parliament Professor Dr Norbert Lammert. The website australianaviation.com.au wrote: "Australian landmarks bearing the name of German explorer Ludwig Leichhardt will now include one at 40,000 feet, after Qantas christened a Boeing 737-800 aircraft in his honour." ('Ludwig Leichhardt given 40,000 feet honour', 3rd November, 2014, accessed 02/12/2014) 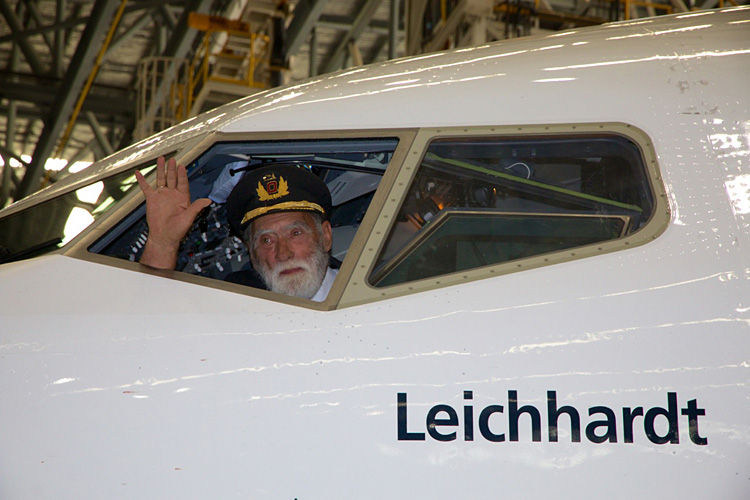 Ludwig Leichhardt, great-grand-nephew of the famous explorer, on the flight deck of the new Qantas passenger jet christened Leichhardt
(Photo: © Robyn Muche and appears here with her kind permission)