and the Herrnhut Commune, Victoria 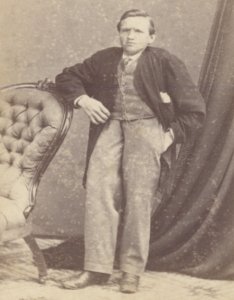 Johann Friedrich Krummnow arrived at Adelaide on the Catharina on the 22nd January 1839. He was a controversial character in the German church community in the first few years in South Australia. He was a tailor, short, and apparently had a strange appearance and a strange way of speaking. During the journey on board the Catharina he had worked as a teacher, however his behaviour with the girls is supposed to have been not completely satisfactory and the community did not allow him to teach in Australia. (Photo at right: it is considered very probable that the man in this photo is Krummnow. The photo was taken in a Ballarat studio. Photo kindly provided by Ian Horn.)

He was keen to establish a religious commune in Australia based on shared property. He held prayer meetings in houses in Hahndorf and found some people who sympathised with his ideas. He claimed to be able to drive the devil out of possessed people. A couple of cases that were reported about him:

1) A girl of melancholy temperament had become very depressed. Krummnow was a friend of her family. He said that the girl did not need medical help and a change of scene, she was possessed by an evil spirit and he would be able to rid her of it. Her parents agreed to this and Krummnow talked to the girl for some time in the presence of her parents. He took her hand and spoke in a pleasant but determined manner: "Look here (pointing at his forehead) and think of nothing else." The patient did as he said and in a short time seemed to get sleepy. Then he spoke in his nasal voice in a serious but ceremonious manner: "Leave, you evil spirit, leave this girl and never return." These words agitated the girl, but Krummnow calmed her. She was placed on a sofa and slept until the next morning.

The girl seemed to be cured of her problem, however, after a few days her depression returned, worse than ever. Krummnow declared that he had driven out the devil, but that it was a particularly persistent devil and had returned with other evil spirits.

The father is supposed to have said that if Krummnow's exorcism resulted in more evil spirits inhabiting his daughter, then he should stay away from his daughter in future. The girl was sent away to live elsewhere for a change of scene and returned 5 or 6 months later completely healthy.

2) Krummnow is also said to have tried to exorcise the devil from a woman who was almost continually fighting with her husband and neighbours. He said her behaviour was due to an evil spirit that could be driven out of her. He took the woman by the hand and started in his usual way, however, something he did disturbed the woman, and she became angry and attacked him and drove him out of her house. Krummnow is said to have declared that she was possessed by Beelzebub, the Prince of devils, so the exorcism hadn't worked in this case.

However, the same people who reported these happenings claimed that Krummnow had success with his exorcisms on some other occasions and had at least improved the patient's condition. He may have had some sort of mesmerising power or hypnotic influence on some people, which explains how he found supporters who joined his commune in Victoria later.

Krummnow had become a naturalised English citizen by the time the Skjold brought to Australia the immigrants who founded Lobethal in 1842. As a naturalised person he was able to buy land from the government. None of those who wanted to settle at Lobethal were naturalised. Krummnow offered to buy the land with their money, on the condition that the settlement be established on his communal principles. The land was bought, but the settlers didn't want to do what Krummnow wanted and it took a while to sort out all the problems that this created.

In the book The United Evangelical Lutheran Church in Australia (U.E.L.C.A.): its history, activities and characteristics, 1838-1938 Theodor Hebart describes Krummnow like this:

Another disturbing factor of these early days was the activity of the separatist and visionary, Johann Friedrich Krummnow. He was a queer fellow, deformed and gnome-like in appearance, with a positive genius for bobbing up in the places where he was least wanted, sowing the seeds of trouble and mischief wherever he went. Clandestine prayer-meetings in Light's Pass, exorcising of evil spirits, land dealing at Lobethal - these were but some of the side-issues of his main scheme - the realisation of a communistic settlement.

The leaders of the early Lutheran Church in South Australia were certainly intending to excommunicate Krummnow from the Church - perhaps he moved to Victoria because he knew this was imminent.