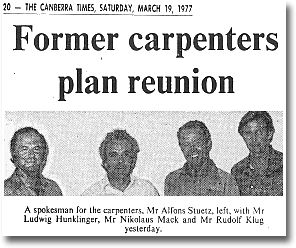 Complete text of the article:

A group of 150 German carpenters who were brought to Canberra 25 years ago will hold a reunion at Easter.

The three-day 25th anniversary reunion will be held at the Harmonie German Club. Mr A. Stuetz, of Hawker, a member of the group said that many were now businessmen, builders, public servants and building inspectors. Fifty-four were still living in the Canberra-Queanbeyan district.

"In the early months of 1951 A. V. Jennings Pty Ltd placed advertisements in several German newspapers for joiners and carpenters to work on a large building project in Australia for a period of two years", Mr Stuetz said.

The 150 selected then sailed for Melbourne. Some were unable to speak any English, others could manage only a few words. They had very little knowledge of Australia.

"We knew it was a big country with a low population", Mr Stuetz said.

"Everyone was disappointed on their arrival here. The living conditions at the hostels were not really good and the men were faced with a hot dry summer after having escaped Germany's winter".

Most of the men who migrated wanted to see something of the world. Others wanted to improve their life-style and make more money.

"Australia's wages were double those in Germany", Mr Stuetz said.

Some of the first houses the "German carpenters" built are still standing in O'Connor, Ainslie and Yarralumla, which was then called Westridge.

Sir Albert Jennings, in a book compiled for the reunion by a committee of the carpenters, says that the "achievement of many of you in successfully entering business in your own right indicates the foresight, initiative and courage shown when undertaking a journey so far from your homeland under unsettled conditions".

In the same publication the Minister for Immigration and Ethnic Affairs, Mr MacKellar, says, "One would have to look afar to find a better example of migration than that of the 150 German carpenters". They came at a time when Australia was suffering a grievous housing shortage and life was not as comfortable as it is today.

Mr Fred McCauley, of the Building Workers Industrial Union says, "The value of your joint contribution to the building industry and of the new culture infused into our society is impossible of assessment in monetary terms".

In another article, Mr Allen Jack, who selected the 150 men, wrote, "Upon reflection, at this time, I believe that the Jennings scheme proved to be a resounding success, not only for those directly involved but for all of us in this country, who have derived so much benefit from the many skills and cultures brought by these men and their fellow newcomers."

(Reproduced with permission of Canberra Times)