During the First World War 6,890 Germans were interned, of whom 4,500 were Australian residents before 1914; the rest were sailors from German navy ships or merchant ships who were arrested while in Australian ports when the war broke out, or German citizens living in British territories in South-East Asia and transported to Australia at the request of the British Government. Some internees were temporary visitors trapped here when the war began. About 1,100 of the total were Austro-Hungarians, and of those around 700 were Serbs, Croats and Dalmatians from within the Austro-Hungarian Empire who were working in mines in Western Australia.

Australian trade with Germany and immigration from Germany were banned for the first few years of the 1920s. Officials in the German Department of Foreign Affairs wrote in the 1920s that anti-German feelings seemed stronger in Australia than in any of the other English-speaking countries.

In World War I the Australian Government wanted to stop companies run by businessmen of German descent from competing with "British" companies, in case companies run by German-Australians could somehow help the German war effort in Europe. An easy way to do this was to intern the directors and managers of such companies, even if they were naturalised British subjects.
Examples:

Australian workers and self-employed small-businesspeople needed to feel that they were also contributing something to the Empire's war effort - by recommending to the government that a German-Australian be interned they were being patriotic, but naturally they were especially keen to do so if that eliminated one of their competitors in business. In Melbourne, Mr F.W. Abbott, the manager of "The Neway", a clothes cleaning and dyeing company in Little Collins St, sent the government the names of three competitors who he claimed were German. He wrote:

Cannot Germans trading under British names be made to disclose their names? This applies to all classes of business in Australia. There would be nothing harsh about such a regulation if passed as they will still have an open chance to trade and to get business from those people of Australia who are not loyal enough to stick to their own people.

Obviously Mr Abbott's complaint was in his own business interest. A law was introduced prohibiting enemy aliens from changing their names. A Melbourne waiter sent to the authorities a list of names of "enemy aliens" working in various hotels and cafes in the city. Some professors on the council of the University of Melbourne stopped the appointment of two lecturers of German background. Dr Maximilian Herz, Australia's most distinguished orthopaedic surgeon, was interned. He had played a pioneering role in orthopaedic surgery in this country. The Sydney branch of the British Medical Association (as the Australian Medical Association was then known) cancelled the membership of German-born doctors and campaigned to have them deported. They said:

It is not in the public interest that medical men of alien enemy birth and qualification should be allowed to practise in the Commonwealth.

The Sydney branch of the British Medical Association no doubt did not like the fact that Dr Herz had strongly criticised the standards of Australian doctors at various conferences before the war.

In a court case in Temora, western New South Wales, "a British subject" was accused of having used indecent language in the bar of the Empire Hotel. Police Magistrate N.A. Ormonde Butler dismissed the case because the two witnesses for the prosecution were unnaturalised Germans. He told them:

"You and your friend should be interned. It is a public scandal that the Federal Government allows unnaturalised Germans of military age to work among and in competition with British subjects".

From this it doesn't seem that a national Australian identity was very developed yet at that time; the bond to Britain was very strong. It was not until 1949 that the Australian Government saw its way to introduce Australian citizenship.

The unions were against Germans in Australian workplaces, whether they were co-unionists or not. The war caused a drop in living standards, higher unemployment and higher prices, and this created hostility to citizens of German origin. In some workplaces Australians refused to work with Germans. The Australian Government saw Germans as troublemakers in workplaces, encouraging strikes in order to weaken the war effort of the Empire and help Germany.
Examples:

Apart from business leaders, the Defence Department saw the consuls and pastors as the leaders in the German-Australian community. The five consuls who were interned in Australia were not professional diplomats, they were honorary consuls, and most were naturalised British subjects. The five were: Eugen Hirschfeld from Brisbane, Ludwig Ratazzi from Perth (of German and Italian background; he was Consul for both countries), Alfred Christian Dehle from Hobart, Otto Johannsen from Newcastle, and Wilhelm Friedrich Christian Adena from Melbourne. As prominent businessmen, their business activities were seen as harmful to British-Australian interests. In South Australia, Consul Muecke was interned for a short time at Fort Largs in April 1916, then from May to October he was under detention in his own home with military guards while his youngest son was fighting in France with the Australian Army after being wounded earlier at Gallipoli. In South Australia Pastor Nickel was interned for a short time, but no other pastors were after that. In Queensland nine pastors were interned, six of whom were naturalised British subjects. Two of those had been born in Australia, including Pastor Friedrich Gustav Fischer of Goombungee. He had been born in South Australia in 1876, and both his parents had also been born in South Australia. Federal Cabinet approved Fischer's internment on the basis of an intelligence report (can 'intelligence' be the right word?!) from the Defence Department which included:

The situation in the German districts gives great anxiety to British residents, and the best way of relieving their anxiety, as well as of keeping German residents in check, is to intern occasionally a few leading German residents. From this point of view it is considered that the internment of Fischer would be justified.

(One can see how society in Australia at that time still felt "British" rather than Australian.)

Soon after the war started, the Australian government had to set up accommodation for the large number of people who were being interned, so concentration camps (an idea first used by the British Government in the Boer War 1899-1902) were established in each of the six states. In three states (Tasmania, S.A. and W.A.) they were on islands a short distance from the capital city. By the end of May 1915, almost 3,000 people had been interned:

Two months later the decision was made to close these regional camps and transfer the prisoners to concentration camps in NSW. Perhaps this decision was made in order to save costs (for example, in all camps Australian soldiers who worked as guards had to be paid), in order to make communication between the camps and Melbourne headquarters easier, and to make sure that all guards treated prisoners according to the rules. There had been complaints that guards on Rottnest Island had often used bayonets on prisoners, and on Bruny Island the prisoners had gone on strike, and an official enquiry had been set up into a scandal involving the flogging of prisoners on Torrens Island.

For this centralisation of the internees, the Holdsworthy camp was greatly enlarged, and two special camps were also established in NSW, both in jails that were no longer used. The first, at Berrima (130 km south-west of Sydney in the southern highlands), was mainly for ships' officers and sailors, and the Trial Bay camp (on the NSW north coast) was for about 500 internees, most of whom had been deported from British territories in South-East Asia and the Pacific Islands. There was also a family camp at Bourke in the north-west of NSW for overseas internees with wives and children and some female relatives. For many internees the long-distance journey from their regional camp to their new camp in NSW was unpleasant. Many complained about rough treatment by police or military officials. Many were handcuffed during their train journey; being treated in public as if they were criminals would not have been pleasant. The luggage of many prisoners was lost en route, and some found that their luggage had been forced open and things had been stolen. 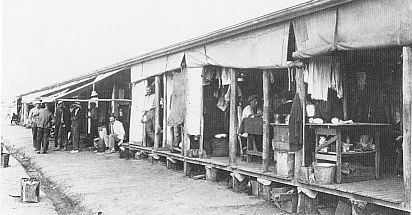 In the camps the internees arranged their own entertainment and many cultural and sporting events. They formed choirs and orchestras, and had theatrical productions. Dr Maximilian Herz directed many successful productions at Trial Bay. At Berrima the sailor prisoners built many different model boats and had regattas and boat exhibitions on the Wingecarribee River. At one exhibition early in 1918 the local public were surprised to see a Venetian gondola, a scale model of the sailor-training ship Preußen, a Chinese junk and a submarine. The Berrima prisoners were also allowed to work for money on local farms.