In 1855 Friedrich Herbig, a 27-year-old tailor, left his village of Grünberg (160 km south-east of Berlin, now part of Poland) to emigrate to Australia. He travelled on river barges along the Oder River, through the city of Frankfurt an der Oder, through Berlin, on the Aller canal, into the Weser River and thence to Bremen. On Wednesday 6th June 1855 he was one of 110 passengers sailing on the Wilhelmine, which was making its second trip to the colony of South Australia.

On Monday 3rd October he went ashore and soon made his way to Blumberg (today known as Birdwood), 45 km north-east of Adelaide. It had been settled about seven years earlier. A few weeks later he heard of work at George Fife Angas's dairy "The Springs", 19 km to the north of there. He made his home in the large hollowed-out base of a gnarled river redgum tree that measures 6 metres at its widest and is 21 metres high. (It is estimated that the tree is now about 300-500 years old.) The hollow opening faced away from the direction of rain, and the tree was convenient for him as it was on the banks of a stream and 1.5 km from the dairy where he worked. 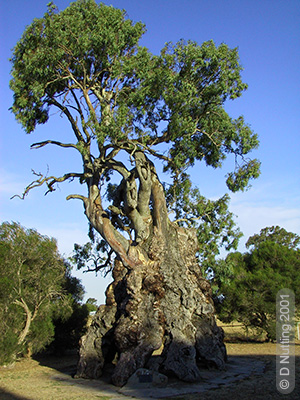 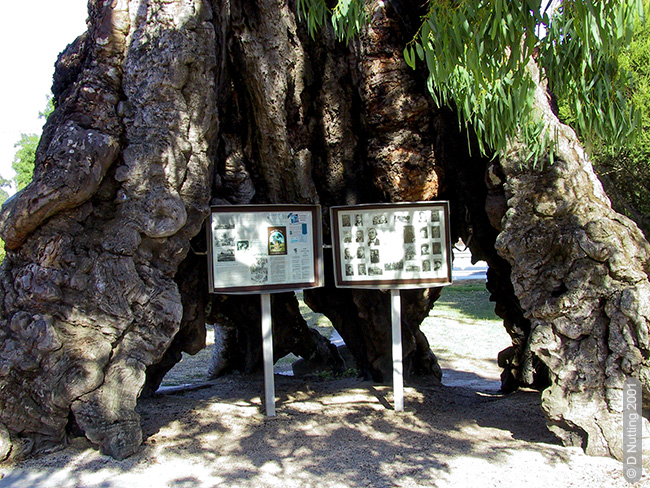 At first he leased the 32 hectares of ground (11 years later he owned it), and planted wheat on it while he continued his work at the dairy.

The Vesta reached Port Adelaide from Hamburg on Saturday 30th November 1856, with Caroline Rattey (16 years old) and her uncle and aunt on board. They settled at New Hoffnungsthal in December 1856. They were illiterate. Rattey is an anglicised form of the Polish name Ratachi. In 1857 Caroline's uncle and aunt moved to Black Springs (now known as Springton), but she stayed at Hoffnungsthal as she had taken a job as a maid with Johann Leske.

On Wednesday 4th November 1857 Johann Leske's father Samuel died in an accident when the horses pulling his German wagon bolted. On the day of the funeral, Caroline was alone at the Leske house minding Johann's two young children. A stranger knocked on the door of the farm house, saying he was looking for lost cattle. It is thought that he saw Samuel Leske's wife take a large amount of money from her husband's clothing after the fatal accident, and thinking that it may be hidden in the house was trying to steal it. Caroline told him she had not seen any lost cattle and tried to end the conversation, but he attacked her. He dragged her close to the cow shed, where he found a rope with which he hung her by the neck from a wattle tree. He stabbed her above the left breast and went inside to burgle the house.

Caroline was of sturdy build, and the wattle tree was flexible so that her weight let her feet reach the ground. She freed herself and ran about a kilometre to another farmhouse before she collapsed. The doctor later thought that the reason that she had not bled to death was her plumpness; the fatty tissues sealed the wound. Caroline's attacker was never caught, but the money wasn't stolen either; Samuel's wife had taken it to the funeral, sewn into her clothing.

After the attack Caroline joined her aunt and uncle at Black Springs, where she met Friedrich Herbig. The pastor who married them on 27th July 1858 was one of the first graduates from the first Lutheran seminary in the southern hemisphere for the training of pastors. The 'seminary' was a hut at Lobethal, and the classes were conducted by Daniel Fritzsche (the hut is preserved today in the church museum at Lobethal). Caroline and Friedrich started living together in the tree home. In September 1860 after their second child was born they decided they needed more room, so they moved to a two-roomed pine and pug hut, with a thatched roof, which Friedrich built about 370 metres upstream from the tree. On 4th December 1864 Friedrich's mother Anna Rosine joined them, having arrived from Hamburg on the Suzanne. 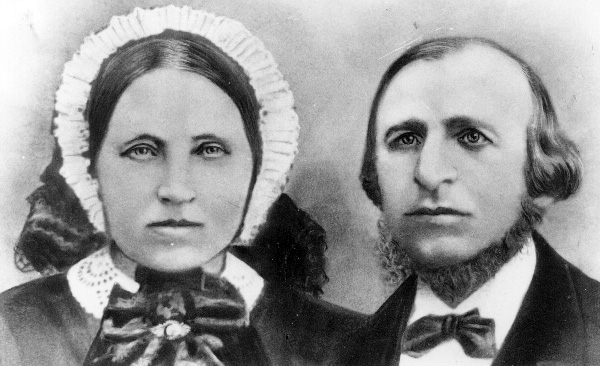 Caroline and Friedrich had 16 children (see below). The Friedensberg ("Hill of Peace") Lutheran congregation was formed at Black Springs in 1859, with services being held in private homes until the church was built in 1861. Friedrich Herbig became a church elder, lay-reader, and president of the congregation.

In October 1886, while delivering a load of chaff to Friedrich Kuchel, Friedrich Herbig fell off his wagon when crossing a creek and received concussion. He later died on Monday 18th October. His eldest child August was 27 and his youngest, Clara, was 15 months old. On 19th March 1927 Caroline died, leaving behind 4 of her sons, 5 of her daughters, 44 grandchildren and 35 great-grandchildren. 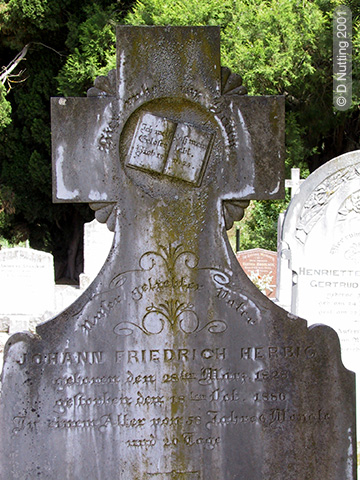 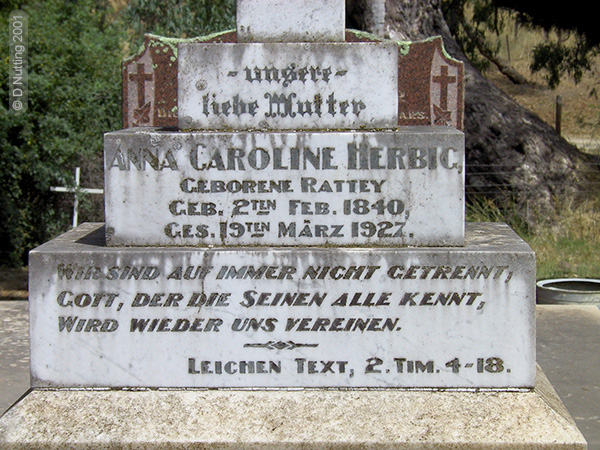 Caroline and Friedrich's children
They named their first seven sons Johann and called each of them by their second name. Using the second name was usual practice in Germany at that time. These seven sons' father (Friedrich) and grandfather both had been given Johann as first name.

Names - an example from North America
This way of naming children was not unique to German-speakers in the Barossa Valley. The Australian linguist Kate Burridge has written about nicknames:

"For some groups, nicknames can be crucial for identification. Among conservative Anabaptist groups in North America (the Old Order Amish and Mennonites) first names derive from the Old Testament and there’s a limited number of family names. In the small village of St Jacobs in Ontario, for example, there are around forty-five David Martins registered at the local post office. So people usually have a distinguishing nickname."

Most of the settlers in the St Jacobs area of southeastern Ontario in Canada, were Mennonites from Pennsylvania in the USA, who spoke Pennsylvania German. They became known as "Old Order" Mennonites due to their conservative lifestyle.

Mennonites?
Mennonites are a branch of the Anabaptists, a particular form of Christianity. These Christians feel that one should take Jesus Christ as a role-model. They are referred to as Anabaptists because baptism is for them an important rite. They believe it's better to be baptised as a teenager or adult rather than as a baby.
These days the large majority of Anabaptists do not live in Europe - they are to be found in America or in Russia. They emigrated there centuries ago. Many Anabaptists in North America still speak German or a German dialect. The best known and largest groups are the Amish, the Mennonites and the Hutterites.
Some Mennonites live in a strictly traditional and conservative way and do not use radios or televisions, computers, mobile phones or similar devices. This is why they are often referred to as Old Order Mennonites. 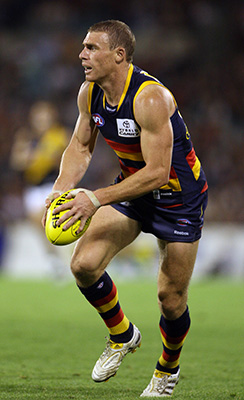 There are many hundreds of descendants of Caroline and Friedrich Herbig, living in different parts of Australia and overseas. Certainly the most famous is the footballer and AFL coach Simon Goodwin. Friedrich and Caroline Herbig were Simon's great-great-great-grandparents. Between 1997-2010 Simon played 275 games for the South Australian team Adelaide Crows, and was a member of two Adelaide Crows teams that won premierships (1997 and 1998). Simon Goodwin was named five times in the annual AFL All-Australian Team. In 2017 he was inducted into the Australian Football Hall of Fame.

At the end of his playing career Simon began coaching and was appointed as senior coach of Melbourne FC in the AFL in 2017. In May 2021 his team was sitting undefeated at the top of the league ladder after nine rounds of the season.

Summarised from:
Herbig, David. (1968). Family History of Friedrich Herbig. Adelaide: Lutheran Publishing House.
A revised version (8th printing, 2008) of this well-told story of the Herbig settlers and the Herbig Tree, Once there was a very old Gum Tree (1979), is available for $12.50 including postage from David Herbig, 'The Gums', Springton 5235, S.A.
Burridge, Kate. (2002). Blooming English : observations on the roots, cultivation and hybrids of the English language. Sydney: ABC Books. pp.212, 214