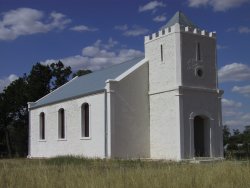 The Ebenezer Mission Station in north-west Victoria was first established in 1859 by the Moravian Church, also known as the Herrnhuter Brothers. The Herrnhuter are a protestant religious community. (Moravia is an area in the east of the Czech Republic.) The Moravian Church was heavily involved in missionary work and still has its headquarters in the present-day state of Saxony, Germany. The Ebenezer mission station was established to ‘civilise and Christianise’ the Aborigines of the area. The majority of the Aborigines who lived on and around the mission were from the Werigaia language group; the mission station being on the land that traditionally belonged to them before the Europeans arrived.

The Moravians had a long history of missionary work, beginning with their mission station on the Caribbean island of St Thomas in 1732. They established mission stations all over the world. In the 1840s they had been invited to open a mission station in the colony of Victoria. After a few years of negotiation with the colonial government two missionaries were sent out to establish a mission station at Lake Boga, near Swan Hill. This mission station was disbanded without permission from headquarters in 1856. It was seen as a failure, since no Aborigines had been converted to Christianity.

Not to be discouraged, the Moravians established another mission station in Victoria in 1859 called Ebenezer. The mission was located some 20 kilometres south of Lake Hindmarsh, on the banks of the Wimmera River. The first two missionaries at the mission were Brother Hagenauer and Brother Spieseke. Since German was their native tongue, they spent some months in England improving their English before departing for Australia.

Although the Moravian missionaries were German-speakers in a British colonial environment, they did have friends amongst the government officials. Charles La Trobe, a former Lieutenant-Governor of Victoria (1851-54), was himself a member of the London chapter of the Moravian Church. He still had influence in Victoria and provided support to the missionaries. The Moravians were also supported by the Lutheran Church of Victoria as well as many other organisations.

After arriving in Australia in 1858 Br Hagenauer and Br Spieseke chose the site from four options open to them. They chose the banks of the Wimmera River since it was the furthest away from the negative effects of other settlers. One of the first things that the missionaries did was to open a school for the Aborigines. It was through schooling that they hoped to be able to educate the Aborigines to read and also to ‘civilise’ them into European ways. Although the lessons were held in English the missionaries also deliberately learnt the local Aboriginal language in order to teach the Aborigines about God in their own language. English, being the language of the colony, was the language that ran the station. Besides school and church services the Aborigines on the station were actively involved in the building of the stone and wood cottages that housed them, as well as hunting, fishing and farming for the men and domestic duties for the women.

Visitors to Ebenezer were amazed at the flourishing garden, which was watered by an irrigation line from the Wimmera River constructed by Brother Hartmann. The pump that drew the water was able to be powered either by the wind or by a horse.

Due to the success of the Ebenezer mission, Br Hagenauer left the station in 1861 in order to establish another mission station in Gippsland (called Ramahyuck, on Lake Wellington, where about 200 Aborigines lived at the time). During the life of the mission station there were seven missionaries. Most of these men were accompanied in their work by wives. The second-last missionary to be placed at Ebenezer was Br Kramer.

The Ebenezer mission was closed in 1904 for a number of reasons. One was that the last missionary, Br. Bogisch, had died in 1903. Another reason was that there were not many full-blooded Aborigines left in Victoria. In 1886 an act of parliament ordered all mixed blooded Aborigines under the age of 34 to vacate the stations; this reduced the numbers of Aborigines on the station quite considerably. Since there were not many people left at Ebenezer and there were three other stations still operating in the state it was decided that the Ebenezer mission station would be closed. The mission station had run for 49 years and was seen to have been very successful. The land was divided up and sold for farming, except for a small section on which the buildings still remain. These are the oldest surviving mission buildings in Victoria. 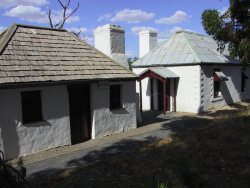 Mission buildings:
kitchen and accommodation for the young girls, 1870

(Text kindly written for this website by Felicity Jensz, 2001. Photos by D. Nutting.)