Sample notices of desertion from ships:

(A notice dated 16th May 1894 reported that the above men had been arrested by Picton Police and remanded to Sydney. They were discharged by the Water Police Bench, as the ship had gone to sea.)

A considerable number deserted from the German warship SMS Leipzig, including the three named in the following notice from 15th October 1890:

S.M.S. Bismarck
On the 26th January 1880 S.M.S. Bismarck left Apia in German Samoa to return home to Germany. After putting in at the port of Levkuka in Fiji a heavy storm caused so much damage to the Bismarck that she had to make an unscheduled trip to Sydney for repairs. This meant that the ship was able to represent Germany at Sydney's World Exhibition and the crew were able to visit the city.

This photo of S.M.S. Bismarck in dry-dock at Sydney was taken by the crewman Claus Franzen. 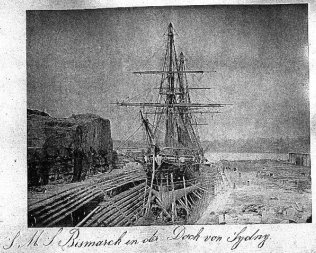 The following information about Claus Franzen and the portrait were kindly provided by his grandson Bernd in Germany (portrait taken in a photographer's studio in the naval base of Wilhelmshaven):