* You can search this page for a specific year or person by using the combination of the keys Ctrl F on your keyboard.

The first 700 or so immigrants into South Australia were motivated by their insistence on having the freedom to worship according to the traditional Lutheran prayer book, but thereafter widespread rural poverty, crop failure, hunger and industrial unemployment in Germany encouraged large numbers to leave. Some also left to avoid having to do military service.

Sir William Hampton Dutton was Hamburg's first Consul in Sydney from 1840-1842. His brother Pelham held the post from 1844-1847. As a young man Sir William had travelled a lot in Germany and attended university classes in Prussia. Usually consuls were people of German background.
More on Consuls/Diplomats...

On 28th October the Skjold arrived in Adelaide with 28 families from the same area in Germany as the Klemzig and Hahndorf settlers. About 20 percent of the passengers had died from illness during the sea journey. In 1842 they established the villages of Bethanien in the Barossa Valley and Lobethal near the Adelaide Hills, led by Pastor Gotthard Daniel Fritzsche. 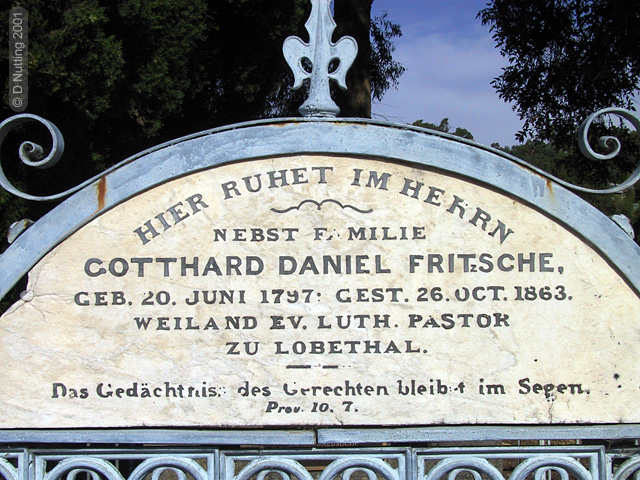 Pastor Fritzsche's grave behind the Lutheran church at Lobethal. The stonemason forgot the "Z" in Fritzsche, and squeezed a small one in later, between the "T" and the "S".

On 18th September the emigrant ship Patel arrived at Adelaide from Bremen bringing Germans, including experienced miners who got work at the "Monster Mine" (copper deposits) at Burra. They included the mining Captain (superintendent) Ey, and Georg Ludwig Dreyer and his son Georg, who were employed to organise the smelting at Burra and to build a smelting house there. Dr Ferdinand von Sommer, a German mineralogist who arrived from NSW, was employed as superintendent for three months while Captain Ey was learning English. The combination of German officials supervising Cornish miners was not successful. The mine owners changed to the Cornish system of mining. Nevertheless, in April 1851 approximately 80 of the 427 miners working in the Burra mines were Germans who had experience of mining in the Harz mountains. The others were mainly Cornishmen. In Germany's Harz Mountains were mines that had produced lead and silver for hundreds of years. From 1825 onwards, metals from mines in South America were sold cheaply in Europe and put many of the Harz miners out of work. Many of these people emigrated in order to find work. The German miners who went to South Australia worked in mines at Glen Osmond, Kapunda and Burra.

Australia's first German-language newspaper was established in Adelaide. Its editor was the well-known mineralogist Johannes Menge. "Die Deutsche Post für die australischen Kolonien", known also as "The German Australian Post", was the first of many weekly newspapers and monthly magazines that have been published in Australia right up to the present.

Ludwig Leichhardt and his companions vanished during his second attempt at crossing Australia from east to west. No trace of his expedition has been found. Nine separate extensive but unsuccessful searches were conducted over the next century.
More...

Karl Ludwig Wilhelm Kirchner (who had arrived in Sydney on 20th July 1839 on the Mary) returned to Germany to work there for a few years as immigration agent for the NSW government.
More...

The ship Prinzessin Luise arrived in Adelaide on 7th August with a large number of skilled urban professional immigrants, so-called "48-ers". These people left Germany after 1848 for political reasons. In that year, middle-class people in the German states started an unsuccessful revolution. They wanted to create a united German nation with an emperor, but they also wanted to introduce democracy and have an elected government that would be responsible to a parliament. This revolution was unsuccessful, and a considerable number of 48ers, dissatisfied educated people from a variety of professions, emigrated to Australia (e.g. lawyers, academics, musicians, master craftsmen etc.). Passengers on the Prinzessin Luise included: Martin Basedow and Dr Carl Mücke, who developed school education in SA; Dr Richard Schomburgk, who had been Prussian government botanist and was director of the Adelaide Botanical Gardens from 1865-1891; conductor & composer Carl Linger, who established Adelaide's first philharmonic orchestra and composed "Song of Australia" (which came to be regarded in South Australia as an unofficial national anthem), and Hermann Büring, who became involved in the wine industry and whose family business has become well-known in Australian wine-making. Among 48-ers on other ships was Friedrich Krichauff, who instigated re-afforestation of areas of SA that had been cleared earlier for settlement.
You can read here Theodor Müller's description of the Germans in Adelaide after 1848.

The first four ships to bring groups of German immigrants to Victoria arrived from Hamburg:
Goddefroy, on 13th February;
Wappaus, on 7th March;
Dockenhuden, on 21st April;
Emmy, on 19th December.
34 passengers (10 families) on the Emmy had been recruited by the Melbourne businessman William Westgarth to set up vineyards for the Mayor of Geelong Dr Alexander Thomson. The vines died later due to disease, and these first German families in Geelong established the settlement of Germantown outside of Geelong, turning to mixed farming. The first Lutheran school in Victoria was established there in 1854 under Johann Stanger. During World War One the name of Germantown was changed to Grovedale. German immigrant workers who were hired to work on western Victorian properties at Hotspur, Beaufort and Narrawong had probably arrived on the Goddefroy and the Wappaus.