Bethany - the first settlement in the Barossa Valley

In 1842 twenty-seven families settled near the Tanunda Creek and named the village Bethanien (now Bethany) after the place in the Bible (it means "a fertile place"). They were part of the second migration of Lutherans who went to South Australia for religious reasons. In 1841 they had arrived with their Pastor, Gotthard Daniel Fritzsche, on the Skjold and joined fellow-Lutherans who had arrived in late 1838 and early 1839 with Pastor Kavel. Initially they were accommodated in the existing German villages of Klemzig and Hahndorf. Those who went to Hahndorf later established Lobethal, and those who went to Klemzig later showed interest in the Barossa Valley. 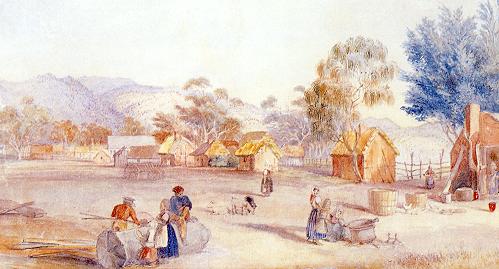 Hufendorf: Bethanien was the first village in the Barossa Valley, and was built in typical Silesian style, with the cottages arranged in a line along the main street. Each family had its own long, narrow strip of land stretching from the main street in front of the cottage to a common pasture bordered by the creek. A variety of crops (cereal crops, vines, vegetables, fruit) were produced by the family on their strip of land. Their strip of land ended at the village common, a pasture land where all the villagers had their animals grazing. This type of settlement is called in German a Hufendorf settlement. It guaranteed access both to fresh water and the main road. The hope was also that the long, narrow land strips, often up to a kilometre deep, ensured that everybody had an equal share of both fertile and not so good land. Lobethal in the Adelaide Hills was also established along Hufendorf lines. 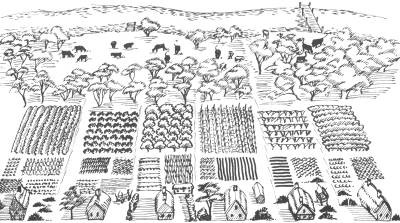 As with other German settlements, the combination of church and school was important. A school was established in Bethanien by Pastor Fritzsche in 1842, and the third teacher there was Friedrich Topp, who had arrived in Adelaide on the 15th October 1842 on the Taglione. Topp started work in the Bethanien school in 1843/44. His career spanned 45 years and he was still teaching in his 80th year. He served as the verger and organist of the church, and kept minutes of meetings in beautiful hand-writing. He was known as a hard-working promoter of religious faith and he made many home visits to sick people. The children were taught in two groups: the older ones in the morning, and the younger ones in the afternoon. Apart from the usual basic subjects, there was also an emphasis on Bible stories and on hymns.

Charles Otto of Bethany wrote a comic poem in German about Bethany, probably in the 1860s. Here are two of its nine verses.