The first German school built in Bendigo was that built in MacKenzie Street late in 1857. It was designed by Bendigo's prominent German architect William Vahland, who was a member of the first committee of the Lutheran church in Bendigo. At least 42 children were promised for enrolment before the school building could be completed. It is almost certainly the oldest Vahland building still standing in Bendigo. For a few years it was also used for Lutheran church services. It is thought likely that after this school was merged with the German Common School in 1872, the building continued to be used for activities such as Sunday School, confirmation classes and German language classes. Photo below: The MacKenzie Street school building. 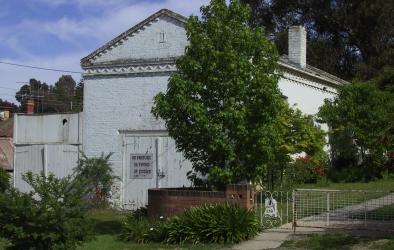 Today's Bendigo Primary School No. 877 owes its origins to the enthusiasm for education of the early Bendigo German community. The school was built by the German community of the Ironbark area. The following notice appeared in the Bendigo Advertiser on the 16th, 19th, 21st, 23rd, 26th, 28th and 30th September of 1865.

"We the undersigned parents and guardians promise to send the under-named children to the German Lutheran School about to be erected at Sandhurst under the regulations of the Denominational School Board."

William Vahland laid the foundation stone of the building in February 1866. On 3rd July the Government Inspector stated: "The school is by far the best-built school in the district." In January 1867 the Government Board of Education decided to grant financial assistance to the school, which received the official name German Common School, 877. In 1872 this school and the German School in MacKenzie St (also designed by Vahland) were united on this site. In 1877 the building was too small and was extended.

Above left: Information plaque at the entrance to the school. Above right: The art/craft room of the school today. This part of the school is the old (original) Vahland building of 1866. At that time the school consisted solely of this building.

(Thankyou to the Bendigo German Heritage Society for information provided.)