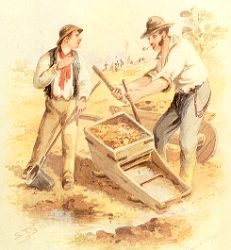 A large number of German miners were attracted to the Bendigo goldfields. As the easily-accessible surface alluvial gold petered out, some Germans such as the Ballerstedts pioneered the mining of the quartz reefs by sinking deep shafts. These Germans employed other Germans in their mines. Some of the Germans had trained in Germany at the Schools of Mines in Clausthal, Freiberg or Chemnitz, and became mine managers at Bendigo. Some already had experience not only in the mines of Germany's Harz Mountains, but also in the copper mines at Burra and Kapunda in South Australia.

Using a list of mining claim-holders printed in Bendigo - the German Chapter, one can calculate that between 1863 and 1872 about 870 people of German-language background registered mining claims in the Bendigo district. Names of reefs and of mining partnerships (apart from those simply consisting of German surnames) show memories of the home country, for example there were: Frühling's Reef, the Hamburg Flat Reef, the Berlin Reef, the Theutonia Co., the Hoffnung Co., the Prussian Reef Co., the Holstein Co., the Hessen Cassel Co., the Bavarian Troop Co., the Lübeck Co., the Hanoverian Co., the Bismarck Co., the Black Forest Co., the Baden Baden Co. and the Albert Mining Co. (named after the German husband of Queen Victoria). 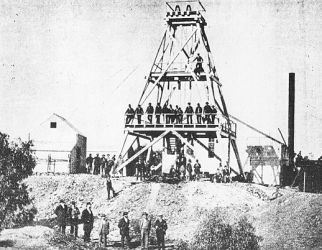 The large number of Germans, and the tendency of ethnic groups to stick together initially on the gold fields and support each other, resulted in some German enclaves on the Bendigo goldfields: a) at Diamond Hill, b) in an area covering New Chum Gully, Victoria Hill and Ironbark (in this area the first Lutheran church was built in 1865 and two German schools were operated), and c) in the area known as the Whipstick (just north of Bendigo). At the Whipstick were the mines King of Prussia, Black Forest. The brick chimney of the Black Forest mine was painted in black, red and gold, following the colours of the republican German flag. In May 1863 Sebastian Schmidt discovered what became known as the Sebastian goldfield (on the edge of the Whipstick), which caused a large rush of diggers from Bendigo. The area is called Sebastian today. On the Sebastian goldfield was the very successful Frederick the Great mine (named after a famous king of Prussia from 1740-1786), which produced 4,286 kg of gold. (At left: advertisement of a German businessman and gold broker in Bendigo, in "Australische Deutsche Zeitung", 4/11/1870)

During the heyday of mining in Bendigo, the Commercial Bank of Sandhurst (early name of Bendigo) over-printed its paper-money in German, no doubt for the convenience of the large German-speaking population in the district.

Other Occupations:
As Bendigo grew into a major permanent city, some Germans went into other occupations.

Hotel-keepers: There were many German hotel-keepers in the city, and a few of those hotel names were clear reminders of the old country: the "Berlin", the "Baden Baden", the "Hamburg", the "Prince Bismarck". Friedrich Kraemer ran the Sydenham Gardens Hotel at White Hills (at the eastern end of present-day Bendigo); his establishment had a brass band and three German girls, with whom customers could, for a fee, dance a mazurka. Kraemer was a pioneer of the dancing saloon on the gold fields. These saloons featured a band, a dance floor and dancing girls known as "hurdy-gurdy girls" or as "hurdies". The hurdies and the saloon owners were usually German. Henry Brown, who published a book in London in 1862 about his five years of adventure "in Melbourne, on the Roads, and the Gold Fields", wrote of the hurdies: "It was considered the highest possible honour to get a dance with one of these fair damsels." (Robyn Annear: Nothing But Gold. The Diggers of 1852, Text Publishing, Melbourne 1999)
In his book Sandhurst: As it was and As it is (1882), John Neill Macartney wrote of the Sydenham Gardens: "There many a pretty fraulein was to be met with, and sauerkraut could be had for the ordering. Many a pleasant visit I paid there, and many a bouquet of flowers I bought, and it was such a pleasure to meet the honest, kindly, German faces there."