By 1890 German-speakers were the largest non-British minority in Australia. Their contribution to Australia was extensive. For example:

Carl Linger - composer. Leader of the Liedertafel (choral group) in Adelaide. Composer of the "Song of Australia"; it became an unofficial national anthem in South Australia.

Johann Eugen von Guérard - landscape painter in Victoria. He was the first Director of the National Gallery in Melbourne.

Baron Ferdinand von Mueller - botanist and scientist. From 1853 he was the Government Botanist of the Colony of Victoria and from 1857-1873 Director of the Botanical Gardens in Melbourne. He travelled widely in Australia and greatly increased the world's understanding of Australian plants and animals.

Carl F.T. Strehlow - expert in the ethnology and languages of the Aborigines. Leader of the Hermannsburg mission station in the Northern Territory 1894-1922. 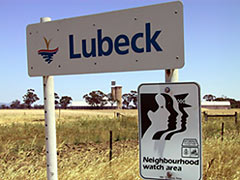 However many German immigrants were farmers and craftsmen and they settled new rural areas and introduced sustainable agriculture there. In the 19th century the great majority of German Australians lived in regional areas rather than in the cities. The Germans were often more successful farmers than the British, as they had already lived as farmers in Germany. (Many British immigrants had a urban background.) They established successful small farms in a similar manner to the early German settlers in Pennsylvania in the American colonies. Germans (some were newly arrived immigrants, others came from South Australia) settled in the southwest of Victoria in the 50s, and in the 70s in Victoria's Wimmera. Through their hard work and endurance they transformed the plains into a rich wheat-growing region. (Photo: Lubeck, Wimmera, named after town in northern Germany. Grain silo in the background.)

Queensland separated from New South Wales in 1859 and became an independent colony. The new colony was keen to encourage German immigrants as a result of the achievements of German settlers in the other colonies. From 1862 onwards many Germans arrived, particularly farmers. They came primarily from eastern Prussia, western Prussia, Pomerania, Silesia and Württemberg and settled in the areas of Rosewood, Fassifern, Lockyer and Toowoomba. They had a good reputation, and Sir Thomas McIlwraith (three times Premier of Queensland during 1879-1893), stated in Parliament: