- "The father of quartz-reefing in Bendigo" - 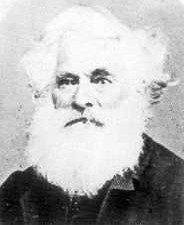 As a teenager Johann Gottfried Tobias Christopher Ballerstedt was drafted into the Prussian army commanded by the field marshal Gebhard Leberecht von Blücher. He fought at the Battle of Waterloo in 1815 when Napoleon was finally defeated. With his son Theodore he travelled to the Californian goldfields in the late 1840s, but had little luck there. Hearing of the discoveries in Australia, they travelled on to Sydney in 1852, and made their way overland to various goldfields, eventually arriving at the Sandhurst (Bendigo) diggings with their belongings in a wheelbarrow. 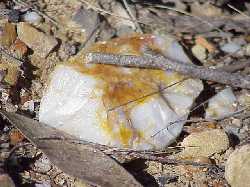 << Lump of milk quartz on Victoria Hill, Bendigo - Early in the gold rushes at Bendigo the gold was won by washing shallow (or alluvial) gravels and clays. From 1853 onwards some miners sank shafts in order to reach the reefs of gold-bearing quartz deep below the surface. Ballerstedt bought a claim on Victoria Hill from a disappointed African-American, Dido Weymouth, for £60 in 1854. After working the reef in that open-cut mine, he sank a shaft 300 feet (90 metres) and struck a rich reef of gold. He celebrated his luck with a champagne luncheon attended by Sir Henry Barkly, the Governor of Victoria. Christopher Ballerstedt had several successful claims on Victoria Hill, and in the 1860s he was probably the richest man in Bendigo if not in the whole of Victoria. He was known as "the father of quartz-reefing in Bendigo", as his success encouraged others to explore Bendigo's deep reefs.

One miner wrote of the excitement in Bendigo as the claims on Victoria Hill tapped new and richer reefs.

Victoria Hill is passing belief and inviting incredulity; it is like an eastern tale, that within so small an area there should have been extracted a plethora of wealth beyond the dreams of avarice.

The Ballerstedts were well-known and respected citizens of Bendigo. When the Duke of Edinburgh arrived in Bendigo on Wednesday 18th December 1867, a written address was presented to him on behalf of the miners of the district, signed by Theodore Ballerstedt, T. Burrows (appropriate name for a miner!) and H. Hattam.

Theodore died only two years later in Magdeburg. Many other Germans mined on Victoria Hill, either as owners of claims or as paid miners (eg the Wittscheibes, Hildebrandt, Alloerden, Luffsman, Utberg, Koch, Schlotterlein, Wybrandt and many others), but Ballerstedt was the most successful.